“Here is a jazz band that is tightly arranged and gorgeously free, a new music ensemble that improvises and plays with precision, a complex modern idiom rendered with scuffed-up life… the Webber/Morris Big Band jumps out like a joy.” – Will Layman, Pop Matters

Both Are True, the debut album from Webber/Morris Big Band, is out now on Greenleaf Music! Order CD / digital on Bandcamp,  iTunes, and Amazon now. Stream the track “Rebonds” on Spotify | Apple Music

Both Are True by Webber/Morris Big Band (Greenleaf Music). Artwork by Brian Henkel.

“They extend the tradition through adventurous arrangements spiced with the unpredictability of improv, by co-opting the nimbleness of a much smaller group, and reveling in non-standard techniques.” –  John Sharpe, AllAboutJazz

“This is a singular and compelling recording. And just like that, we have our first album of the year candidate. Bravo.” – Mike Borella, Avant Music News

“The music never swings in a conventional way. Instead, it drifts along, elements emerging then fading away again, with solos appearing like an animal emerging from the mist in the middle of a forest, gazing impassively at you, then retreating.” – Phil Freeman, Stereogum

“Every time the saxophonists Anna Webber and Angela Morris create a piece of music together, they seem to be picking apart their 19-piece ensemble and reassembling it from scratch.” – Giovanni Russenello, The New York Times

Anna Webber and Angela Morris, two composer-performers whose music overturns expectations for the jazz big band, have co-led this ensemble of stellar New York improvisers since 2015. Their critically acclaimed debut album, Both Are True (Greenleaf Music), was featured on several Best of 2020 lists including The New York Times, Bandcamp, and NPR. The band’s instrumentation is a jazz staple, but the composers’ respective pieces are equally rooted in minimalism, pop, noise, and other music of the past century or so. Integrating improvisation and composed material in unorthodox ways and using extra-musical sources – such as poetry or mathematics – to form the foundation of new works, the traditional big band sound mutates into something unpredictable. The saxophonists take turns filling the tenor chair while the other conducts her own works.

“Webber and Morris achieve a kind of small-group intimacy in their band’s playing … especially noteworthy when nineteen players are involved as they are on this debut recording.” – Ron Schepper, Textura

Anna Webber is a flutist, saxophonist, and composer whose interests and work live in the aesthetic overlap between avant-garde jazz and new classical music. In May 2021 she released Idiom, a double album featuring both a trio and a large ensemble, and a follow-up to her critically-acclaimed release Clockwise. That album, which the Wall Street Journal called “visionary and captivating,” was voted #6 Best Album of 2019 in the NPR Jazz Critics Poll, who described it as “heady music [that] appeals to the rest of the body.” She was recently named a 2021 Berlin Prize Fellow and was voted the top “Rising Star” flutist in the 2020 Downbeat Critic’s Poll.

If Brooklyn’s music circles draw a venn diagram, Angela Morris thrives in the loop between avant-jazz, new music, and pop. A composer and multi-instrumentalist, (known mostly as saxophonist, she grew up playing violin) she has performed throughout North America and Europe everywhere from basements to arenas. Morris composes for, performs in, and leads the Webber/Morris Big Band, whose debut record “Both Are True” (Greenleaf Music) was released in 2020. Her compositions have been premiered by cellist Leo Eguchi and percussionist Chris Froh, violinist Monica Davis, and the Nouveau Classical Project.

Morris is member of several active collaborative ensembles, including Skellettes, Motel, and TMT Trio. Morris organizes the monthly, multi-disciplinary, experimental concert series Brackish – music & art, which has produced more than 35 monthly concerts at St. Lydia’s Dinner Church in Brooklyn. A 2019 Composer Fellow at Gabriela Lena Frank Creative Academy of Music, Morris has also been artist-in-residence at Willapa Bay AiR, the Atlantic Center for the Arts, and the Banff Centre.

“They write to take full advantage of the ensemble, working in dynamics that only a big band could manage…In a sense, the Webber/Morris Big Band is a distillation of the community they discovered and have helped develop.” – Kurt Gottschalk, Musicworks 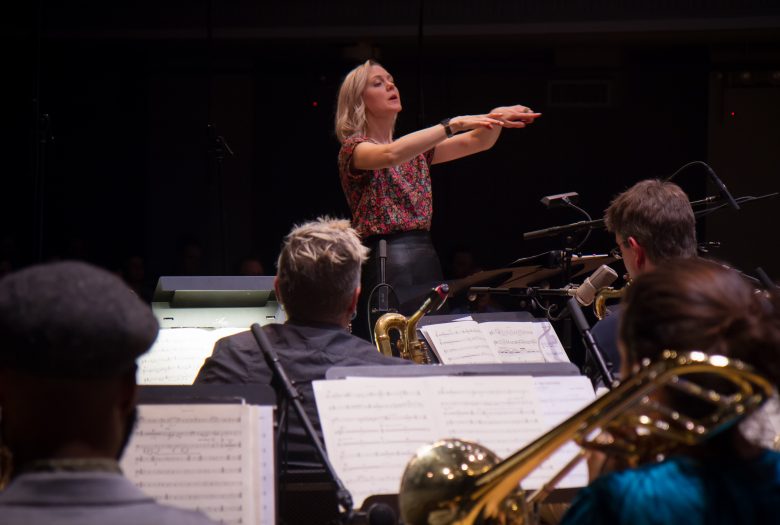 “The music is both introspective and communal, emotional and cool, pulsating and ruminative, yet always alive.” – Richard Kamins, Step Tempest